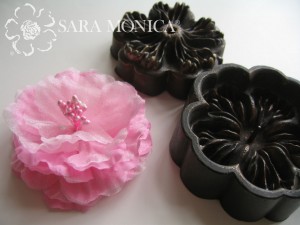 98% of our custom made flowers are made with vintage bronze flower molds (aka: veining tool, flower iron and/or flower die) which were handmade and cast around the late 1800’s early 1900’s by the flower millinery tool manufacturers of New York City. It’s always so much fun to press a petal from a mold for the first time to see the secrets of its beauty that was hidden for 100 years. In the late 1800’s and early 1900’s there were many flower tool manufacturers in New York City’s Fashion District. The mold designs were all handmade, hand carved from plaster and hand cast typically in bronze and/or iron by an artisan specially trained in the trade of flower tools. They were popular in that era because the hat makers, also known as “Milliners”, used them to make flowers to decorate ladies hats. This is why the fabric fashion flower is known as a “Millinery Flower”.  In the 20’s and 30’s NYC was heavily factory based. Eventually hats fell out of daily fashion. After WWII, by the mid 50’s to 60’s the flower die factories moved out of NYC to cheaper areas such as Brooklyn and Long Island. And then, in time, closing down as the industry became outsourced to Western Block Countries (including Soviet Occupied Germany) and then to Japan, Korea and China. China is now the largest manufacturer of Millinery Flowers. And in America there are still small studios, such as Sara Monica LLC, that hand make them as well.  There is still one last large scale millinery flower manufacturer in NYC who I admire and refer many customers to.